Slavoj Zizek in The Sublime Object of Ideology included this subchapter about Jane Austen:

Austen, not Austin: it is Jane Austen who is perhaps the only counterpart to Hegel in literature: Pride and Prejudice is the literary Phenomenology of Spirit; Mansfield Park the Science of Logic and Emma the Encyclopaedia… No wonder, then, that we find in Pride and Prejudice the perfect case of this dialectic of truth arising from misrecognition. Although they belong to different social classes – he is from an extremely rich aristocratic family, she from the impoverished middle classes – Elizabeth and Darcy feel a strong mutual attraction. Because of his pride, his love appears to Darcy as something unworthy; when he asks for Elizabeth’s hand he confesses openly his contempt for the world to which she belongs and expects her to accept his proposition as an unheard-of honour. But because of her prejudice, Elizabeth sees him as ostentatious, arrogant, and vain: his condescending proposal humiliates her, and she refuses him. 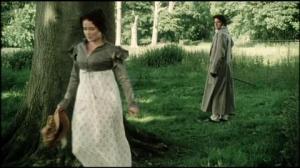 Darcy is about to give his letter to Lizzy.

This double failure, this mutual misrecognition, possesses a structure of a double movement of communication where each subject receives from the other its own message in the inverse form: Elizabeth wants to present herself to Darcy as a young cultivated woman, full of wit, and she gets from him the message ‘you are nothing but a poor empty-minded creature, full of false finesse’; Darcy wants to present himself to her as a proud gentleman, and he gets from her the message ‘your pride is nothing but contemptible arrogance’. After the break in their relationship each discovers, through a series of accidents, the true nature of the other – she the sensitive and tender nature of Darcy, he her real dignity and wit – and the novel ends as it should, with their marriage. END_OF_DOCUMENT_TOKEN_TO_BE_REPLACED

Read my review of Pengiun Classics edition of Pride and Prejudice.